Notes :
(1) This train was reported to have been the first to feature class 37's for haulage into Cornwall. 25058 was also listed as having been used according to a F&W tour list provided to the Webmaster - confirmation is required. Peter Finan adds; With regard to the above railtour on which I participated I certainly can't recall the use of 25058 even if only for a shunt release of the stock at Newquay. At that time 37142, 37267 & 37279 were all based at St Blazey depot for Driver & staff familiarisation purposes & 2 of the 3 were stopped with mechanical issues. The use of a 25 was being mooted for the Newquay section of the tour, however I recall most certainly the use of 37279 was from Par to Newquay & then Newquay to Plymouth. After 37279 was uncoupled & returning Westwards a huge cheer went up from tour participants with Beer glasses & the 2nd man raised his Tea mug in Salute, I am sure this was the 1st time 37's had hauled a passenger train in Cornwall unless of course somebody can tell us differently. 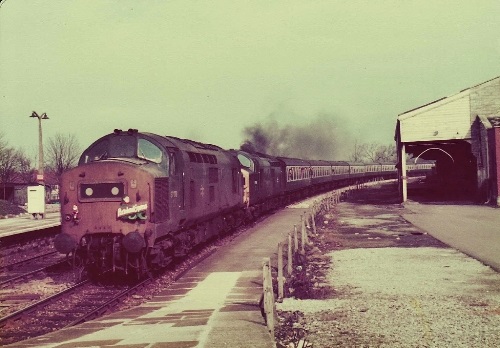