Notes :
(1) Confirmation of route Coventry - Wolverhampton is required, though believed via Birmingham New Street & Dudley Port.
(2) 25218 failed en-route and was removed at Machynlleth.
(3) 46011 added to provide train heat.
(4) Gary Thornton comments: A tour option was available to travel over Talyllyn Railway. I took this option, leaving the tour at Towyn and traversing the TR behind 'Edward Thomas' from Toywn Wharf to Nant Gwernol and 'Douglas' back. 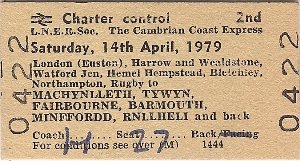 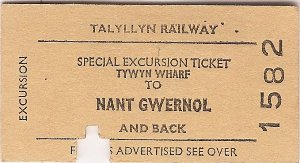