Notes:
(1) This tour was run to 'mop-up' track that was missed on the 20th January "Electro-Diesel Grice" tour (due to late running).
(2) Andrew Pullar comments: According to the itinerary for the 'Suburban Venturer' I still have in my possession the DAA charter was supposed to have run from Norwood Junction after the loco change to Balham via Crystal Palace rather than Selhurst and Norbury. I have no recollection why the route via Crystal Palace was changed. 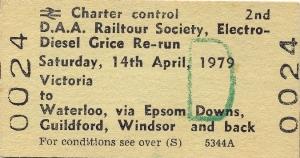