Notes :
(1) Tour was abandoned at York due to heavy snow in the North-East, with passengers reported to have returned home on service trains (although for those who stuck it out at York it has now been confirmed that the train did return south in it's booked path). Was booked for a class 40 to York and back , two different class 37's for the remainder of the day both running single headed, with a class 08 to pull the stock forward to Consett. The tour was re-run on 19th May. The tour timing sheet carried the note: 'As most of you know the loss of the Tursdale Jn to Washington line has been substituted by Washington to Pelaw, and a journey over both Tyne bridges twice, thereby covering all six spurs south of the River Tyne'.
(2) Steven Knight comments: The train DID return to London in its originally booked path. Me and my mate hung around a freezing York station for 8 hours (well we did go to the NRM as well) as we had not enough money to use a service train home AND we wanted more of the 40 haulage! 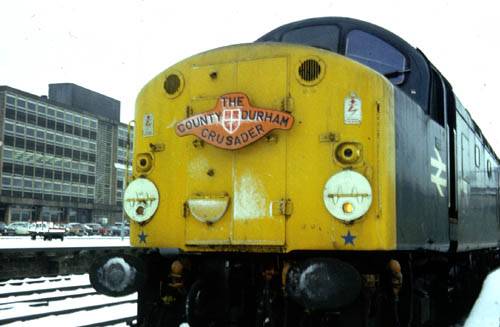 Sources : Nigel Rollings (joined the train at Peterborough, returned on a service train with 40078),
Steven Blyth (on the train throughout) & Colin Marsden