Notes :
(1) Brian Basterfield records this tour as having been run by the Great Western Society.
(2) The Didcot - Dorridge and Leamington Spa - Didcot sections were originally booked for haulage by 6000 'King George V'.
(3) Brian Basterfield comments: This was a tour to forget. Quite simply, 5900 Hinderton Hall was not up to the job. Whether there was a problem with the locomotive, or just poor coal, I don't know. Although the locomotive was blowing off most of the way to Oxford, by Wolvercot Junction speed was dropping, and we had to stop for 8 minutes before Kidlington for a blow up. Thereafter we ambled along clearly in trouble. So we were 51 minutes down by Banbury. Another 11 minutes were dropped to Leamington Spa, but then the loco gave us a surprisingly good run up Hatton bank, not falling below 40 mph. But we were 73 minutes late arriving at Dorridge. 7029 Clun Castle  backed down on to the rear, and we were heading south again 12 minutes later, a smart piece of work. But we were held at Hatton North, and as a result, were 71 mins late into Stratford. But by cutting an hour off the time allowed at Stratford, we were able to depart only 11 minutes down. A heavy bout of slipping on departure cost us 2 minutes. This was followed by signal checks at Warwick, and so 7029 was 24 late into Leamington, where 5900 was to take over. The big question was, would Hinderton Hall perform any better on the return journey?. The answer was no. 18 minutes late away, we immediately dropped another 17 minutes to Banbury, taking over 42 minutes unchecked for the 19.8 miles. After taking water, things slightly improved on to Oxford and Didcot, there was only another 5 minutes lost. We were 26 minutes late in (having saved 14 minutes taking water at Banbury). 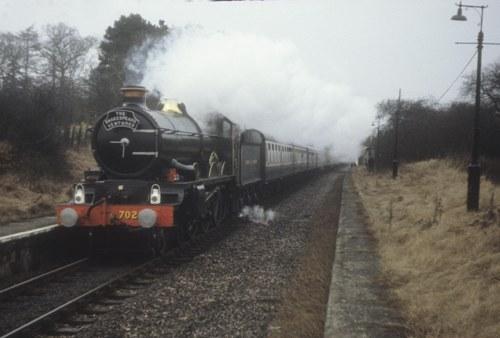 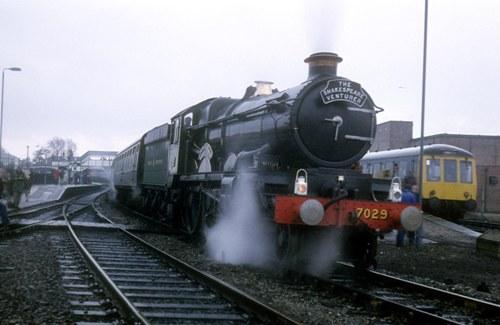