Notes :
(1) Brian Basterfield comments: The purpose of this tour was to facilitate the transfer of Leander from Dinting Railway Centre to Steamtown Carnforth. The weather played a large part in the enjoyment of what was a memorable tour. The sun shone, and there had previously been several inches of snowfall, particularly in the Hope Valley.  I joined the train at Derby, having travelled from Birmingham with 47035 on the 7.30am service. 47051 took us from Derby, via the Dore South curve and the Hope Valley, to Guide Bridge, where 5690 awaited us. Leander performed excellently all day. An amusing incident occurred on the Leeds to Carnforth leg of the tour. SLOA Manager Bernard Staite and BR's David Ward were waiting at Hellifield, intending to join the train during it's booked stop. But 5690's driver, believing that the stop was a conditional water stop, and not needing any, decided to carry on. So Bernard and David watched helplessly as the train went through. But they arranged to have the train stopped at Giggleswick, arriving there by taxi. We were 11 late into Carnforth, where we took on electric traction in the form of 85032, which, after a delayed run down the West Coast Main Line, arrived Nuneaton 8.56pm. 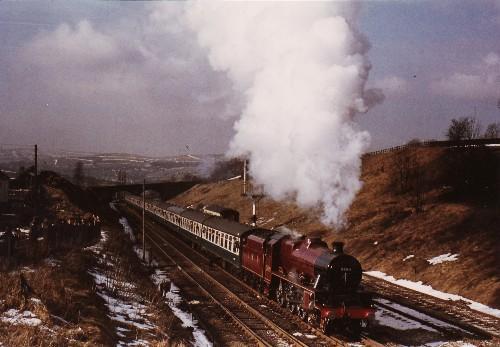