Notes :
(1) The following report was published in LIVE RAIL, magazine of the Southern Electric Group, March 1979 issue;
The train was booked to leave Clapham Yard for London Bridge at 0733.  However, the guard did not appear and departure was delayed until 0926.  The empty stock was booked to run via Victoria in order to pick up buffet stores, but due to lateness it went directly to London Bridge via Herne Hill.  Departure from London Bridge, scheduled for 0900, did not take place until 1025 and the first part of the route, via Streatham Hill, Longhedge Junction, the Canterbury Road curve and Blackfriars, had to be omitted as an engineer’s possession had been taken at Loughborough Junction.  The subsequent section of the tour, via Greenwich, Maidstone West and New Beckenham, was worked as scheduled, but after return to London Bridge the train continued to Charing Cross in order to water the buffet.  Upon return to London Bridge there was an impromptu visit to Blackfriars, after which the tour continued as booked to Bromley North via the Crayford and Lee spurs.  Instead of returning to London Bridge again, the train reversed at New Cross and then visited the Hayes and Addiscombe branches.  The tour was then supposed to run to North Kent West Junction, but due to a points failure it had to return to London Bridge again.  The Caterham and Tattenham Corner branches were visited and the locomotive changed at Norwood Junction.  73110 was substituted for 73106, but the tour organiser had to do the coupling himself as the guard refused to.  Due to late running the trip over the Epsom Downs branch was cancelled and the tour reversed at Sutton instead.  It then proceeded to Longhedge Junction, by way of Mitcham and Wimbledon, where there was much shunting about in order to cover all of the new connections.  However, as it had long been dark it is not certain that many of the passengers appreciated what was going on.  The tour then made its way to Effingham Junction via Tulse Hill and reversed there instead of continuing to Guildford.  It managed to finish as scheduled, via Surbiton and Hampton Court, to end up at Waterloo at 2300.
(2) Andrew Pullar comments: According to the itinerary the reversal point at Bricklayers Arms was further than other trips had reached before. "We are scheduled to continue over the branch as far as Dunton Road bridge, which will be quite an achievement as recent previous tours have not gone beyond the previous bridge at St. James Road, some third of a mile less far. We should therefore reach almost to the point where the lines divide to enter the deport sidings themselves". I do remember thinking the trip got further than the other tour down the branch I had previously caught so believe that Dunton Road was reached. What I don't recall was the faffing around at Longhedge Jn. alluded to on the web page. I would love more detail on that bit. 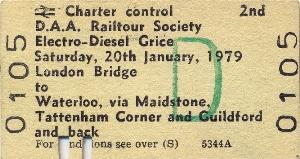 Timings (Booked Only)
(from Clive Barlow)