Notes :
(1) John Clifford comments : On looking at my notes I find that the booked route from Bedenham Siding should be: Bedenham Siding (Rev) - Elson Gate (Rev) - Bedenham Siding (Rev) then as shown but the route we actually took was as shown already. I think that there may have been a dispute with the civilian personnel in the Army (?) base. Bill Lynch adds: the reason given for Bedenham Siding - Elson Gate being omitted was industrial action by Navy staff. The itinerary implied reaching Priddy's Hard, and I assume Elson Gate was on the line thereto.
(2) For visit to Marchwood open day and, as an option, a visit to Hythe Pier Tramway. At Marchwood MoD steam loco number 92 + two carriages were providing a shuttle between Jetty and Mulberry Halts, taking 7 min each way. 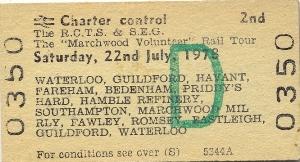 Sources : Bill Lynch (on the train throughout) & John Clifford