Notes :
(1) Should have had same 33's on return leg but they were "borrowed" by BR to rescue a failed train. The train ended up with 47540, though attempts were made to get a pair of 50's from Bristol. 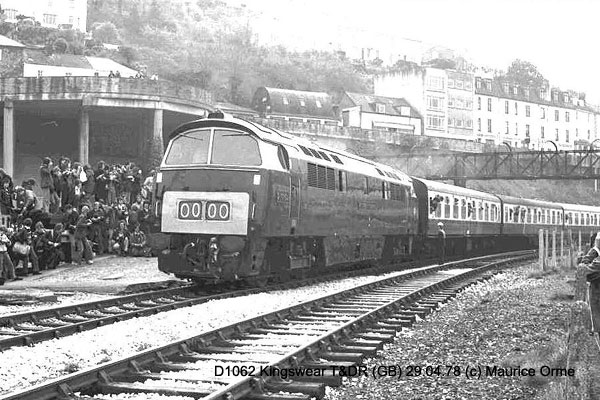 Although this was only my third railtour, it was the second occasion on a tour I was to reach Paignton! The previous time being only a couple of months earlier with a somewhat more rateable form of traction on the front (Deltic 55003 "Meld"). We had been denied "Western" haulage on that visit because the T&DR preserved railway was shut owing to bridge damage caused by thawing snow.

New track a lot of the way for me as we went via Basingstoke & Yeovil to Exeter - I recall standing in the front vestibule with a couple of friends enjoying the thrash from our pair of "shredders".

This visit was more successful and D1013 "Western Ranger" and D1062 "Western Courier" were both sampled for haulage (one out for one back). One of my friends Fathers knew the owner of D1013 and we were armed with a letter permitting us a visit to the cab - no cab ride but we did "cab" D1013 at Paignton.

Our tour stock re-appeared with a 47 on the front - it seems British Rail had taken our 33's to rescue a failed train! Rumours of a loco swap at Bristol to a pair of 50's was promising but in the event we had to make do with the 47 all the way back to London.