Notes :
(1) Jim Sparks comments: A Class 40 had been confirmed by BR as hauling the train throughout with a Class 37 piloting up the valleys, but at very short notice, the organisers were informed that the '40' would be removed at Newport for fuelling and servicing and a pair of Class 37's would haul the train up the valleys. Last minute moves to get the '40' back on for the Blaenavon branch were unsuccessful, but there was worse to come! On arrival back at Newport, it was announced that 40120 had been declared a failure, so 47001 was provided for the return run. 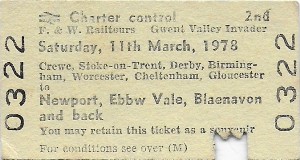 Timings (Booked Only)
(from Jim Sparks)