Notes :
(1) Following the failure of the original tour to reach Paignton on February 19th, the re-run was more successful. Unfortunately the planned Western haulage had to be abandoned owing to a bridge being washed away on the Paignton & Dartmouth Steam Railway due to the thawing snow! A run to Par and back with a 46 was put on instead.

Sources : Gary Thornton (on the train throughout) & Clive Barlow

After bad weather put paid to our attempt to get to Paignton two weeks before, myself and two friends set out for London hoping this day would be more successful. We had however already received notification that due to a bridge washout on the T&DR it would not be possible to make the planned run with the Western's to Kingswear and back.

55003 'Meld' did the honours right through to Paignton - writing this in 2009 I cannot say I remember that much about the journey, but as I had received a tape recorder for my birthday the week before I was busy recording 'Meld' whenever it was under power so I do have some memories to listen to.

At Paignton D1013 'Western Ranger' was on display and we were able to cab it. I remember we were disappointed not to be able to have either D1013 or D1062 'Western Courier' for haulage, but were content to hear Ranger's engines running.

After a short run back to Newton Abbot 46003 was attached to the rear of the train and 55003 was given a break as the peak took us to Par and back. I recall a semi-panic at Par during the run-round - the train set-off without those of us on the platform - thankfully it was only a platform swap! 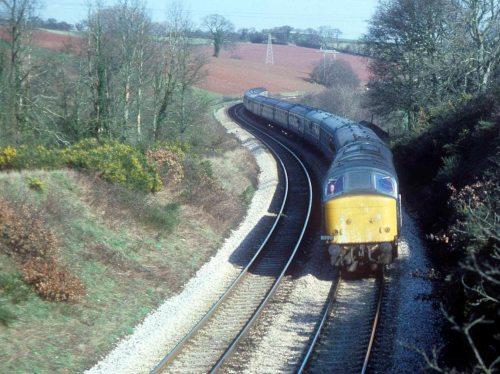 'Meld' took back over the train at Newton Abbot for the trip back to London. In this case we achieved what was advertised, even arriving back into Paddington a few minutes early. 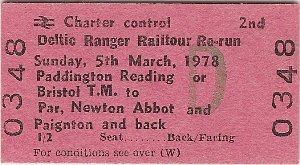