Notes :
(1) On arrival at Melton, all passengers received a free pork pie then went via road coaches to Stapleford Park, to visit house, gardens & miniature railway. The road coaches then took passengers direct to Leicester for the run home, with the tour stock travelling ECS between Melton Mowbray & Nottingham (Eastcroft Carriage Sidings) then on to Leicester after servicing. 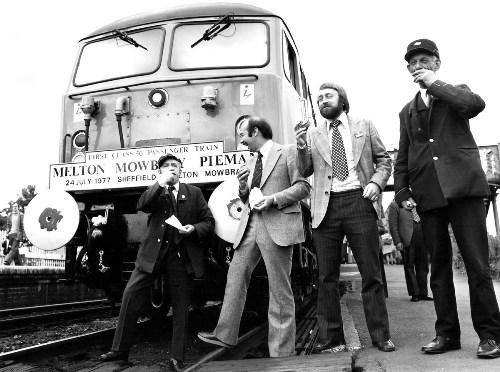 The Melton Mowbray Pieman at Melton Mowbray, when passengers were
handed a pie. The picture shows, second left, Gordon Rushton who was
Divisional Passenger Manager, Sheffield Division, at the time. Next to him is
Alan Dance who worked in the divisional office. On left and right are members
of the train crew. (photo: Frank Dumbleton)

Timings (Booked Only)
(from Vic Smith)