Notes/Mini-review :
The tour's expectations went out of the window on getting the handout as we left Luton. "the advertised class 76's cannot be authorised for passenger traffic due union blacking". So forget the traction bonanza and enjoy mileage behind the dull 47049. Rare curves meant we avoided Guide Bridge so the first 76 was viewed on Ditton bound BOC tanks on Dinting Flyover.

An hour's stop at Dinting saw a visit to the steam centre saw kettles of varying wattages brewing up. At Woodhead West we were checked for a tour participant who had missed the train at Dinting, being rescued by a fast car. The modern, lit Woodhead tunnel impressed us all but less so that the advertised Penistone - Wath section had been deleted from the itinery because it closes on a Saturday at 1300.

At York 40019 was amongst the quality power on passenger services whilst we again had 47049 to return us South. 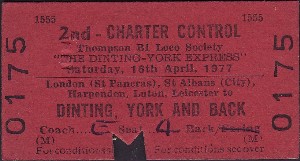 Timings (Booked Only)
(from Greg Beecroft)