Notes :
(1) The tour options included a) Visit to Eastbourne, or, b) Trip on the Bluebell Railway (including coachfrom/to Haywards Heath). Gordon Lacy took the Bluebell Railway option and a round trip behind steam loco 30064 was made between Sheffield Park & Horsted Keynes (on a six coach assorted rake).
(2) After a lengthy inspection by the driver at Flitwick a replacement loco was requested and 47174 was duly replaced at Leicester by 45063. Gordon Lacy comments: In the course of regaining lost time, the Peak hit the 'ton' through Loughborough, a first for me with this class! 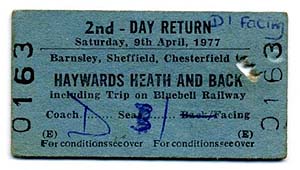