Notes:
(1) This tour was run as a relief to the main 'Western Requiem' tour which ran a week later.
(2) Booked route on the return journey was via Severn Tunnel & Pilning but 'was diverted via Gloucester due to a signal failure in the Severn Tunnel' area...with a passing time through Gloucester of 19/51 detailed it is presumed the train went reverse of outward route (i.e. via Chepstow) however the same timing sheet clearly shows a passing time of 19/10 at Pilning, which cannot be explained...? 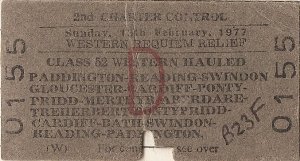