Notes :
(1) This was the last day of passenger trains from Finsbury Park to Moorgate via the Met lines and Finsbury Park to Broad Street via Canonbury.  The new electric service started on the Monday via the tube line to Moorgate. Alan Osborn comments: I seem to recall that the actual last service train from Moorgate was in fact cancelled (12.50 Moorgate to Hertford North) and stranded passengers were conveyed on the special as far as Kings Cross (either that or some had scrounged a ride on the special as this was the last train to run direct to Kings Cross (Suburban)). 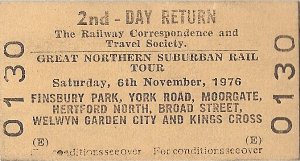