Notes :
(1) The tour participants utilised a block booking on a Merrymaker Excursion (picked up at Wolverhampton and dropped at Wrexham General on the outward then at Chester on the return, back as far as Wolverhampton) to get them to/from this tour. 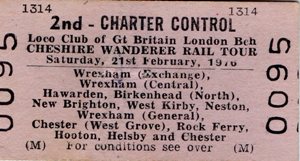 Note: Alan Osborn recorded all actual times 2 minutes LATER than those shown below thus confirmation is required if all the times need to be altered to read 2 minutes later? Those provided by Alan Osborn to fill in gaps have been uploaded as 2 minutes earlier than he supplied to keep in line with those already uploaded.

Notes :
(1) Optional set-down for travel to James Street, at own expense.
(2) Optional pick-up from above excursion.