Notes :
(1) An advertising leaflet gave the tour name as 'Preservation Special No.3'
(2) D5209 was called on at Manchester Victoria as bank engine to Miles Platting but despite being positioned at rear of train was not used and did not assist.
(3) Advised initially as D1906 on the outward leg, a timing sheet and tour advertising leaflet seen by the Webmaster are both hand-marked that D1948 was the loco between Birmingham and Manchester. David Wignall  however has the loco used from Wolverhampton to Manchester Victoria as D1946. The return leg between Manchester Victoria & Stockport Edgeley was originally uploaded as having been hauled by either D1948 or 48773 however David Wignall's records have this leg as hauled also by D1946.
(4) Route originally uploaded as routed via Crewe however David Wignall's records have it as via Stoke-on-Trent. 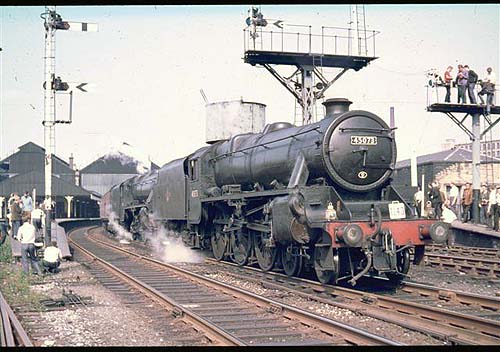 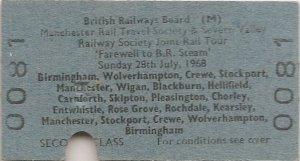