Notes:
(1) Running tender first.
(2) Train ran all day carrying 'The Mancunian' headboard (itinerary showed both 'Lancs & Yorks Rambler' and 'The Mancunian'). This trip should have originally had a BR Std 5MT for part of the (now revised) route. Consequently, 60019 ran throughout on what was advertised as its 'Last Run'.
(3) Gordon Lacy comments: Time was comfortably kept until we reached the Preston area. An unscheduled (?) 9min water stop was then made at Parkside. Having dropped 6 more min to passing Manchester Piccadilly, due to a signal stop at Ordsall Lane, we were to be held a further 11 min before taking the GC route at Ardwick Jn. The run-round was achieved quite quickly, and the unusual sight of a tender-first A4 was to take us to Stockport Edgeley, for a further reversal. Further signal stops at Deal Street and Bury, preceded 'missing' our water stop at Broadfield. After standing 17 min, we carried on to Rochdale, after which a 10 min 'water stop' was made at Hall Royd Jn. The photstop at Mirfield was cancelled, after two more signal stops, which enabled some of the lost time to be regained before Leeds City.
(4) Gordon Lacy questions the number of coaches listed as used: Train was booked load 9 vb90 = BSO, 3x TSO, RB, 3x TSO, BSO.  I only recorded 9 on the day in the log book. Did it have 10?  I thought it had been restricted to 9 because of the 'tight' run-round at Guide Bridge? 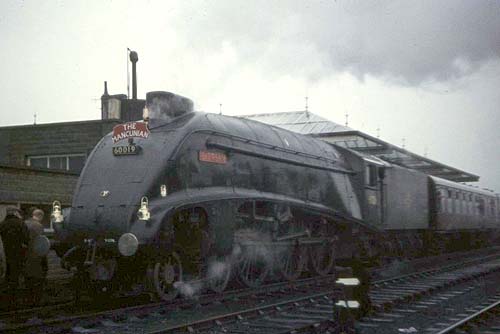 60019 during a watering stop at Skipton. 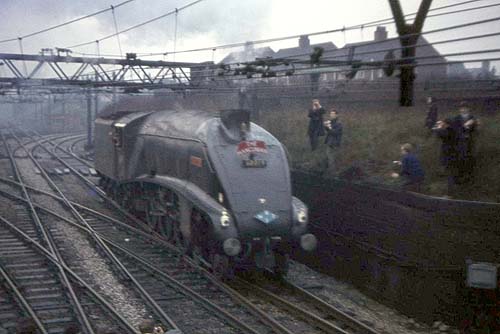 Running round at Guide Bridge. 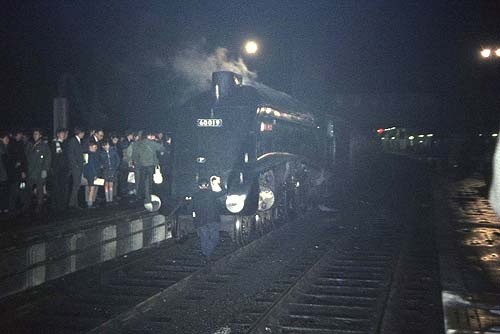 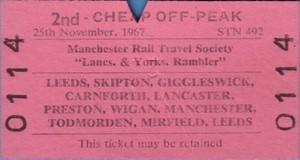 Timings (Booked Only)
(from Gordon Lacy)