Notes:
(1) Route & loco confirmation required - Above information gleaned from SLS journal article (volume 43 no. 505) as published on the NELPG Website. It was originally planned to start this tour at Saint John's Crossing in Stockton, the original passenger terminus of the Stockton and Darlington Railway, but the absence of platforms prevented this and similarly the termination of the tour at Middlesbrough Goods Station.
(2) D5160 on rear. The diesel was required as the crossing loop at Redmire was not long enough to accommodate the six coach train.
(3) At Catterick Bridge the loco ran round then propelled the train under the bridge carrying the A1 road before running forward again onto the Catterick Military Railway.
(4) At the time the tour was originally planned it was thought there would no longer be watering facilities at Darlington or Bishop Auckland, and it was consequently intended to change to diesel power for the journey up to Weardale. Fortunately however the equipment was still in place thus the loco change was not required and 62005 watered at Darlington Bank Top on the outward and Bishop Auckland on the return. 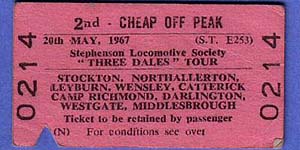 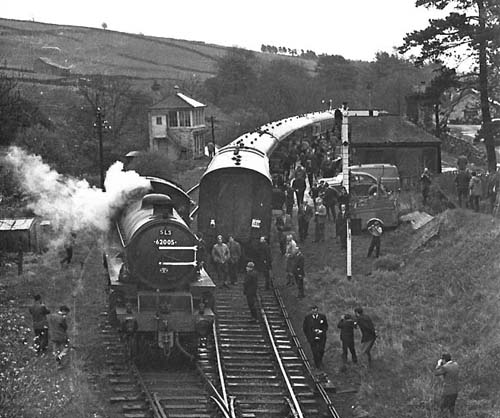 62005 runs round its train at Westgate (photo: Alan Brown, courtesy of Disused Stations)