Notes :
(1) S.L.S. timing sheet confirms the train on the 24th was expected to consist of seven brake vans hauled by a class 20 diesel loco. Between arrival at Grangemouth No.3 and departure from same, the timing sheet simply stated 'tour of Dock Lines' with a more detailed explanation in the tour notes thus; 'it is expected the tour will comprise from Grangemouth No.3 via Grid Iron Yard and East Wall (Grange Dock) to B.P. Siding, returning to Grangemouth No.3 then via the West Cut Bridge and the North Wall (Grange Dock) to Mining Siding then back to Grangemouth No.3'. Confirmation is required if this is what took place on the day.
(2) Loco propelling.
(3) Assisted by 42274 at Greskine.
(4) There was no train on 25th March due to the running of British Rail's 'Grand Tour No.1' on that date. Originally it had been planned to run a scenic trip to the West Highland line but this ran on 24th August 1968 instead as the 'West Highland Scenic Diesel'.
(5) Part of the Scottish Rambler No.6 but also named the 'Edinburgh District Tour', originally advertised to be a DMU it was changed to be a 'type 2' diesel loco and three coaches. 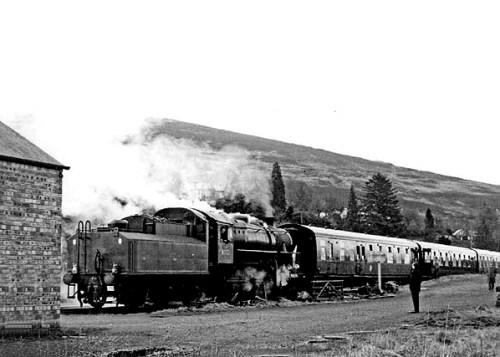 Webmasters note: the following photo, of D5317, has been offered as belonging to a R.S.S. organised tour on 1st April but Ian Clark of the S.L.S. has researched with the aid of input from others who travelled on this (BLS/SLS) tour and they are suggesting this photo is more likely to have been of the 27th March 'Edinburgh District Tour', day 3 of this multiple-day trip. Is this the 27th March train, hauled by D5317, at Haddington?
(Photo by G N Turnbull ©TOPticl Digital Memories - see
www.TOPticl.com for further details and a chance to buy a full size copy) 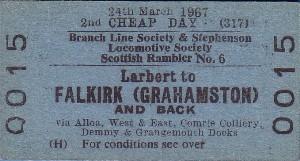 From Andrew Fairholm's ticket collection.
Note Denny is misspelt 'Demmy' on the ticket. 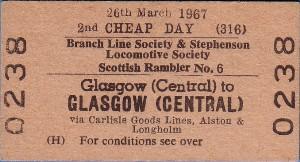