Notes :
(1) Ted Buckley comments: The empty stock came into Piccadilly from Longsight direction into the through platforms at the side of the station (13 & 14) and we set off in the direction of Manchester Oxford Road. Somewhere near Rotherham we saw in storage the 7 Midland 1F ‘half cabs’ recently withdrawn from their duties at Staveley Iron & Steel Works. At Doncaster we had time to visit the Works. There wasn’t a single steam loco present, all being diesels & DMUs. At York we visited firstly the sheds (the present NRM) and then the Museum, then on its former site. The celebrity loco on shed was 60019 Bittern, newly-outshopped and already privately-owned. There was a good selection of steam locos on shed, in contrast to Doncaster Works. Passing through Normanton, locos 77000/3/4 were seen stored on shed, rags on chimneys.
(2) Ian Cook had queried the running date for this trip as his records show it having run on 19th November however Ted Buckley confirms it was definitely the 20th as he has spotting records dated 19th November at his home spotting location then the 20th for this trip which he was on. 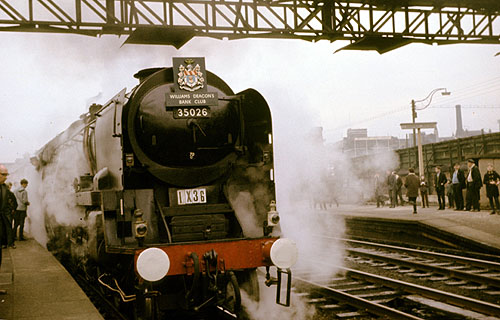 35026 pauses at Sheffield on the outward leg (photo: Alastair Wood) 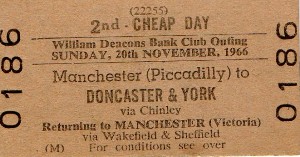