Notes :
(1) Route confirmation required - above is from booked timings. Reversal points not detailed. The letter sent out with the tour tickets stated that the train would travel to Tyne Commission Quay but that a toll would be levied for all passengers (of about 1/6d each). Passengers not wishing to pay this would have to alight at Percy Main and rejoin the train there later. A further statement made in the letter was that British Rail had advised that the the direct line from West Gosforth to Gosforth East Jn had been removed and consequently the tour would travel from West Gosforth to South Gosforth and reverse to proceed to Benton. 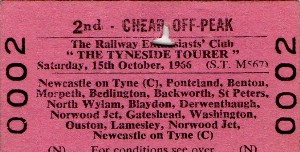 Timings (Booked Only)
(from Stephen Bragg)