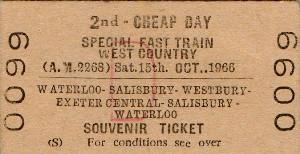 Terry Jackson comments : Mr. Winkworth organised a number of tours over the Southern route to Exeter with locomotive performance in mind but most of them were dogged to some extent by a variety of problems. However this tour more than made up for everything which had gone before with superb performances by all of the engines and footplate staff involved. The first leg to Salisbury with Driver Bert Hooker of Nine Elms achieved a net time of 71¼ minutes with a maximum of 102 at Andover. Then from Westbury we had Driver Parsons of Salisbury on a schedule of 91 minutes to Exeter St Davids. A schedule of 75 minutes had been requested from the Western Region but was refused, an action that was widely scorned at the time. In the event a run with a net time of 75 minutes was made well within the capabilities of the engine. A max of 55 was achieved over Whiteball summit. The return from Exeter Central to Salisbury again with Driver Parsons produced another superb effort with a time of 83½ minutes to Salisbury and a max of 88 below Templecombe. The final leg to Waterloo with Driver Kelly of Salisbury produced another sparkling run with a net time in the region of 77 minutes and a max of 91 at Brookwood. The whole tour was a credit to everyone involved and gave all of the passengers a day they would never forget. Full details of the runs to Exeter can be found in D.W. Winkworth' book Bulleid Pacifics which I can thoroughly recommend.

John Clifford comments : In all the years that I have been on tours this still rates as my best ever. The tour was advertised as a high speed & that is exactly what we got. The load was limited to 8 coaches & for the first stage to Salisbury we had an unprecedented timing of 78 mins which was slightly exceeded due to relaying work between West Byfleet & Woking & at Hook. Nevertheless we reached 85 before West Byfleet & from the relaying slack (covered at a minimum of 12 mph) accelerated to pass m.p. 31 at 73, then 87 (maximum) at m.p. 38, then a further slack at Hook (covered at 19 mph), & we reached 70 before the Basingstoke restriction. After this we flew. We were doing 90 at Whitchurch North and didn't drop below 90 till we were climbing to Grateley. The maximum was 102 at Andover Junc. There was a minimum beyond Grateley of 81 & we reached 96 down Porton bank. My timings show that we covered the 30 miles from mp. 51 to m.p. 81 in 20 mins 13 secs - an average of just over 89 mph - not bad when the line limit was 85! The rest of the tour continued at a high standard with a maximum of 74 along the Wylye valley to Westbury & some good work to Exeter. We returned to Salisbury in just over 83 mins for the 88 miles gaining almost 12 mins (perhaps the Western Region's dislike of steam meant that they did not trust us). For the final section to Waterloo we were allowed only 80 mins which was exceeded due to relaying slacks between Idmiston & Allington, at Hook & near New Malden. There were also 2 signal checks in the London area. Nevertheless we reached 59 before the first slack, 67 at Grateley & 90 at Andover. There was another 90 at m.p. 45 & 91 before Brookwood. All in all a veritable tour de force. As said at the start, my best tour ever. I will not see the like again. 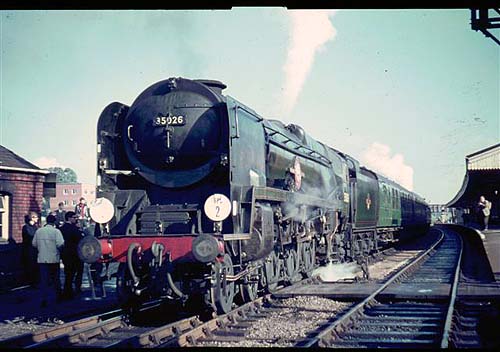 This photo, from Alan Sainty, was unidentified but John Clifford believes it
may be of this tour, photographed at Westbury during the loco change from
35023 (the steam seen at the rear?) and 35026. 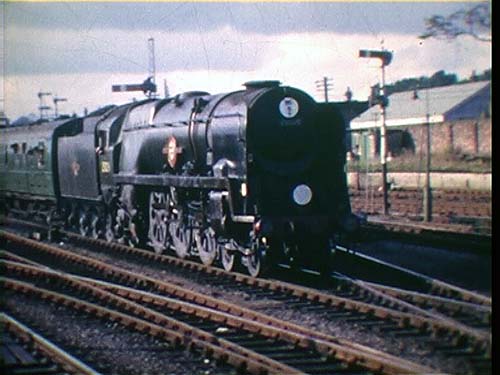 Two shots of 35023 at Salisbury - arriving (above) & departing (below)
(images: John Simons -from Cine film, courtesy of Bob Bishop) 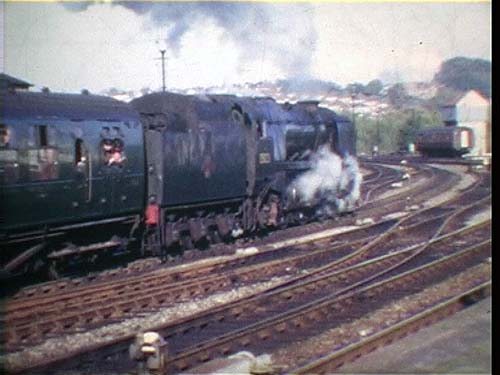