Ian Allan
(Paddington to Penzance Non-Stop and Penzance to Waterloo)

Notes :
(1) Originally uploaded as having run on 7th June 1966 in error.
(2) Gordon Jakes comments: the outward journey was non stop albeit a very slow crawl was required approaching the Royal Albert Bridge due to a late running up train. The non-stop run Paddington to Penzance was achieved in 5hours 13½ minutes. The return journey achieved a non-stop journey from Plymouth to Waterloo albeit with a short signal stop at Keyham. The time between Plymouth and Waterloo was recorded (by me) as 3 hours 53½ minutes which beat the Ocean Liner Express of 1904 (see below) by just under 10 minutes!
(3) During the time at Penzance a special helicopter charter was available which provided about 90minutes on St Marys in the Scilly Isles.
(4) The following is quoted from the train handout:
“ It is just two years ago on the corresponding Saturday of 1964, that the epic ‘Great Western’ ran from Paddington to Plymouth and back. It was recognized at the time that this would really be the swan song of steam, and so it proved to be. Nothing of comparable performance could be or has been, attempted since. Whether we like it or not, the age of the electric and the diesel is upon us and we felt sure that a special could be run, utilizing modern power, which would in some measure compensate for what we have lost with the passing of steam.
Penzance non-stop was, in fact, contemplated by the Great Western between the wars, when it was planned to put water troughs west of Plymouth, but this never materialized and today’s is the first non-stop run ever attempted by any train over this entire route. The point-to-point timings promise some stimulating running over all sections, particularly the 98 minutes from Penzance to Plymouth. Between Plymouth and Waterloo, the fastest time ever recorded appears to have been 4 hours 3minutes 11seconds, by an Ocean Liner Special on April 23rd 1904, with stops at Exeter and Templecombe. No non-stop run has ever been made between Plymouth and Waterloo due to lack of water facilities in former days.” 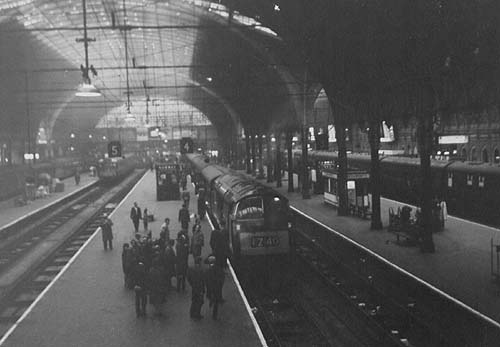 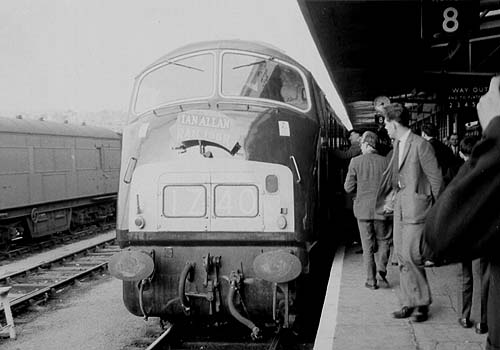 D823 at Plymouth after taking over from D1010 (photo: Gordon Jakes) 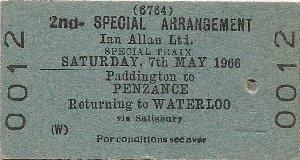