Notes :
(1) This was the last steam passenger train to traverse the entire Penrith to Workington Line.
(2) Train terminated at Manchester Victoria (extended from Manchester Exchange - due to very late running). Many passengers alighted at Arnside and returned to Preston on a service train. Dave Groves adds: severe blizzard conditions (even about 15" snow in central Manchester) had stopped most public transport in NW England and any special would normally been cancelled. However for reasons not entirely understood (perhaps a Royal train?) the route was given special clearance. Even with service trains running hours late (e.g. the overnight Glasgow – Manchester was over 180mins late), the spirited running between lengthy stops minimised many potential delays but eventually our luck ran out... Actual departure from Manchester was 9mins late at 09:14, but only 1min late at Blackburn, but we then had to wait for the snowplough to reach Hellifield. Departure from Hellifield was 54mins late, but then we had to wait at Settle for the Blea Moor/Ais Gill snowplough to reach wherever. By Keswick we were still 79mins late despite very fast running in poor conditions and departure from Workington was about 82mins late as we had to let the late running 17:08 to clear (we overtook it via the Barrow avoider). As Manchester Exchange barriers were closed as usual overnight it was no surprise that we terminated at Victoria platform 16 138mins late at 00:09. 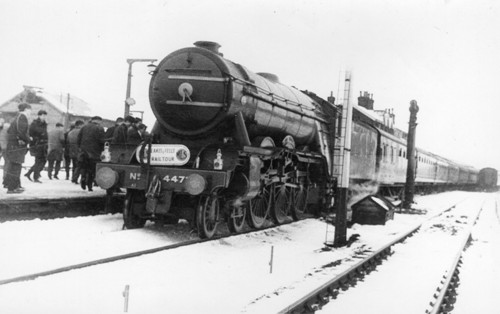 4472 at a snowy Hellifield (photo: The John Debens Collection) 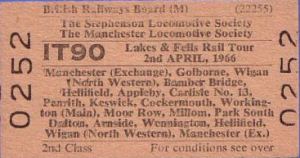