Notes :
(1) The 'original' S15 Commemorative Railtour was the tour on Saturday 16 January 1966. Due to demand, this was a duplicate tour to meet that demand.
(2) Tony Deller (shedmaster at the time of Feltham MPD) comments: though booked for six coaches in fact it was load seven which was officially one over the permitted load for an S15 going over the alps. On this day I rode on 30837 for most of the trip.
(3) For works visit. The following locomotives were noted during the guided tour; 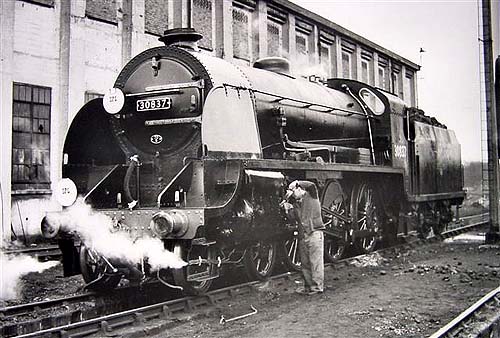 A comment from Tony Deller: The above picture caption cannot be right unless referring to an earlier day. The train left Waterloo around 09:15 hrs which meant the engine prep at Feltham would have been around 07:00hrs, it would have still been dark in January, not a bright sunny day as in the picture. Around a five days before the run the engine was taken on a test run leaving the shed around 11:00 hrs and getting back around 14:00 hrs. This test was to ensure the engine was OK because it had been out of service for over five months at that time. I would suggest it was on this day that the photo was taken. It was a bright sunny day as my pictures of the event show. 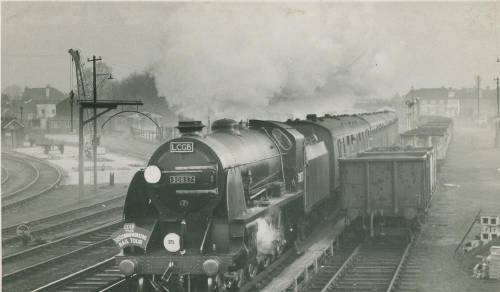 30837 passes what is thought to be Six Bells Jn! (confirmation of the location
would be appreciated). Photo: courtesy of "The Creech Crusader"