Notes :
(1) This tour was reported in railway press to have used the same loco as the RCTS tour of the same date however information subsequently supplied is that the trip was in fact postponed to 6th March 1966. 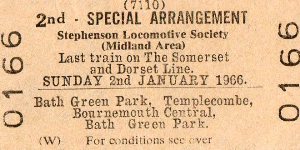