Tony Wray comments: This tour marked the first visit of a Merchant Navy to the line - because of weight restrictions they were officially banned from the S & D but with closure only months away 'nothing really mattered any more', and the restriction was waived to allow the big Pacific to follow the path of its smaller West Country and Battle of Britain sisters for a run up to Templecombe. 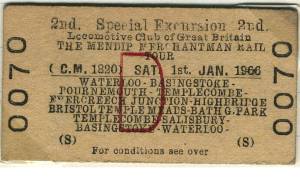