Notes :
This five coach train visited a number of lines that were due to lose their passenger service, the Halwill - Petrockstow section had been closed to all traffic four weeks prior to this tour, special permission being required to run over this section of line.

(1) The poor condition of Meldon viaduct required 41291 to be detached at Meldon Jct and cross the viaduct separately from the train.
(2) For climbing to Mortehoe Summit Collett 0-6-0 3205 banked the train from Braunton.
(3) 41206 & 41291 were used as bankers out of Ilfracombe.
(4) Whilst 3205 was turned at Taunton shed the station pilot, Class 08 diesel shunter D3517 moved the train from the up side to the down side. 3205 was probably the last ever loco turned at Taunton shed as the depot closed an hour later and it was reported to have been disconnected the following day. 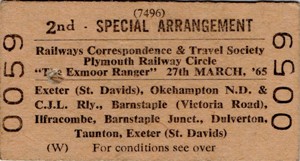