Notes :
(1) For Eastleigh Works & shed visits, tour of Southampton Docks and visit to Ocean Terminal.
(2) The tour was advertised as having a 'Britannia' from Broad Street (70004 'William Shakespeare' to be precise). Participants were told that the reason for having the type 2 diesel instead was that the engine had come off Willesden shed facing the wrong way and the tour left 15mins late as a result. The loco change at Willesden lost a further 10mins. Booked 70004 was however failed due to an injector problem and 70020 was substituted at the last minute.
(3) This leg was booked to have been a West Country class.
(4) It is understood the locos booked should have been 30064 & 30073 (in green).
(5) Formed in 1955 and originally known as the 'Middlesex Loco Spotters Club', their name was changed in the late 1950's to the 'Home Counties Railway Club' then in January 1963 it changed again, to the 'Home Counties Railway Society'. 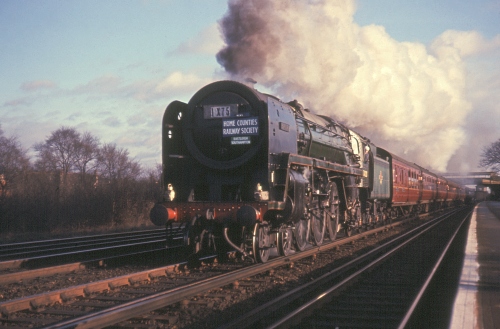 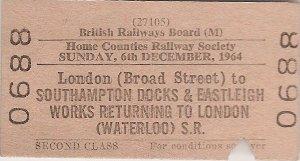