Notes :
(1) For Division 2 match (final score: Southampton 0:1 Crystal Palace)
(2) Brian Halford comments: Memories - As a schoolboy it was my first long distance run behind a steam loco which I believe was a Bullied Pacific. I boarded the train at Norwood Junction and it ran via Selhurst, Streatham, Tulse Hill, Herne Hill, Brixton, Factory Jn, Clapham Junction, East Putney, Wimbledon, Basingstoke, Winchester, Southampton Central. Return the same route. On the return the train slipped to a stand on the curving, rising gradient between Herne Hill and Tulse Hill and was assisted by the following electric passenger train.
(2) Start point of tour unconfirmed but presumed to be Forest Hill given the options - ticket having the pick-up points in alphabetical order. 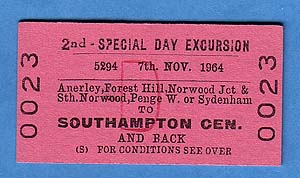