Notes :
(2) DMU confirmation required. Upon return to Hull Paragon the 17.35 Hull to Withernsea service train was caught (for which an ordinary ticket had to be purchased at a price of 4/6d). The return working, an ECS, became a RCTS special.

Mark Harrington comments: A contemporary photo taken leaving Hornsea Bridge the same day implied an arrangement may have been on force for the Hornsea branch as well as Withernsea? Webmasters note: Not the case - the run to Hornsea Bridge was using service trains for which an ordinary ticket had to be purchased (also price: 4/6d); 09.35 from Hull, returning at 10.15 from Hornsea, 10.54 back at Hull. Services to Hornsea and Withernsea ceased from 19th October 1964. 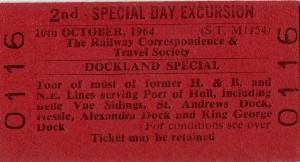