Note :
(1) Was advertised for 'Coronation' (46257 'Sir William A. Stanner F.R.S.' named in advertising, if available) but the Britannia was substituted as the last Duchess had been withdrawn the previous month.
(3) Formed in 1955 and originally known as the 'Middlesex Loco Spotters Club', their name was changed in the late 1950's to the 'Home Counties Railway Club' then in January 1963 it changed again, to the 'Home Counties Railway Society'. 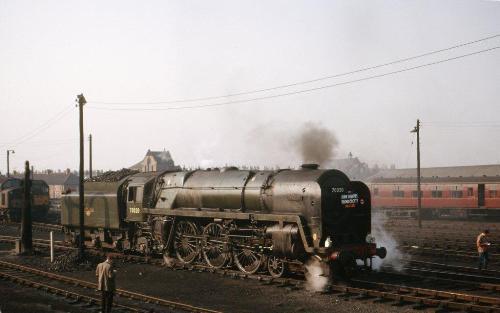 70020 is seen being serviced on York shed (photo: Arthur Haymes)