Notes :
(1) Train was wrongly routed.
(2) An out-of-course stop was made at Lenzie to drop off a "normal" who had got on the train at Carlisle (trying to get to Glasgow).
(3) Train delayed after Wigan North Western on the return by having to stop to sort out the tail lamp, which was defective.

The train was made up of twelve coaches, 450 tons gross. The tour was run to commemorate the imminent passing of two classes of thoroughbred locomotives and visiting two secondary, possibly threatened Scottish Routes. The performance of the three machines was sparkling to say the least and a remarkable tribute to the crews working them. The run of 60007 over the Waverly Route and of 46256 on its last southbound run over Shap were notable.

Terry Jackson comments : If the Ian Allan High Speed Great Western tour in May ranked as one of the epic locomotive performances in railway history, then the run by a Carlisle crew with 60007 from Carlisle to Hawick with 450 tons was also deserving of that accolade. The details of the run were fully documented in the magazines at the time and it was described then as an all time record for the Waverley route with that load. With the rapid decline of the Carlisle-Edinburgh route that followed, I doubt whether it was ever surpassed.

Dave Groves comments : The original proposal was for an A3 for the Waverley, Rebuilt Scot Glasgow back to Carlisle, but ScR refused to supply, initially offering an A4 for the Waverley with an A3 for the GSW. In the event, no suitable A3 was available so a second A4 was "in reserve" if required at Glasgow, later changed to Niddrie West. On the day, I understand the reserve A4 (60009) was called upon during the Hawick stop as coal situation on 60007 was causing some concern; the subsequent 16 min late departure from Glasgow St John's was due to Control trying to establish the whereabouts of the replacement engine (Plan A - remember?)...

David Whittaker comments: I was fortunate enough to be on this tour from Carlisle . The delay at Glasgow St John's was due to the need to detach 60009 to take water on an adjoining track and  there was also a problem with the steam heating connection between locomotive and train, which caused further delay, both here and later at Carlisle. The performance of 60007 over the Waverley route was simply magnificent. I was in the 12th coach and could hear ' 7 ' quite plainly rasping away on the climb to Whitrope Summit. Perhaps you could mention Driver Maclaren & Fireman Whiteman (actually both passed firemen at the time) of Carlisle Kingmoor for their efforts. People have also had much fun over the years at the expense of the 'stray' passenger and the initial misrouting of the train at Carlisle No 3, but in fact the train was wrongly announced at Carlisle as the 09.30 Manchester -Glasgow ,the rear three coaches being for Edinburgh, which may have contributed to this. At the Niddrie stop it was found that the catering staff had underestimated the amount of food needed for lunches, resulting in a foraging party taking off over the fields and cleaning local shops out of bread, butter bacon etc! A great day.

Peter F Chadderton comments: The 'Lowlander' tour has always stuck in my memory as a special highlight. When booking, I had no idea that the actual day would be the very last operational day of the Stanier Pacifics, but on arrival at Crewe there was 'Sir William', the slightly fading BR maroon paint work well bulled up and actually looking quite splendid. I have to say that my railway company allegiances have always been divided, with my schooling in York and our family home in North Cheshire, so of course, the icing on the cake was then to find 'Sir Nigel' at Carlisle. I still wonder on how many previous occasions (if any) it had might have been possible to see both these iconic designer-named locos together? I certainly remember the necessary set-back following the wrong routing at Port Carlisle Branch Junction. A very sharp brake application had still left the train well over the actual junction, but the same road reversal and restart was quickly accomplished to gain the North British line. Heaven knows what today's bureaucracy of risk assessment jobsworths would have made of that manoeuvre! In the event, I suspect it was all arranged without involving anyone but the signalman and the train crew. Then, with the incentive to regain the lost time, the crew on No7 produced the most amazing climb of the Waverley line, particularly up the last few miles to the summit. My abiding memory is of the loco actually being momentarily (and quite audibly) eased before some of the sharper bends, before resuming the most astonishing demonstration of power. All so beautifully handled by the fine men on the footplate, as your contributor observes. I had no idea that these lads were only passed-fireman grade, but they really did us proud that day, no doubt rejoicing to find a Gresley engine in such willing form and top condition. Something of a change from a run-down V2, perhaps? I still have my souvenir ticket, but only a very few colour slides. My real photographic objective that day was to secure some 8mm cine shots with my brand new camera, but nearly all my footage was ruined by a manufacturing fault with the lens assembly. 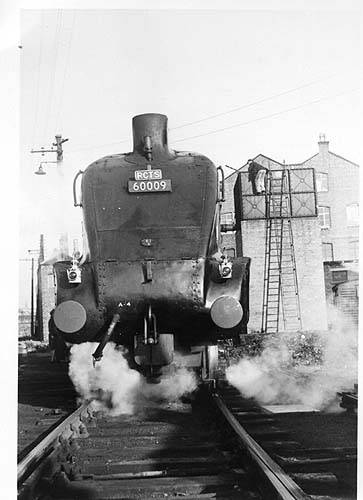 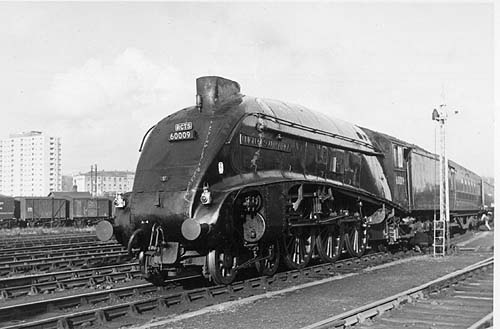 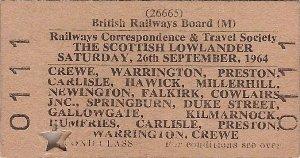