Notes :
(1) For Charlton v. Crystal Palace match.
(2) Route confirmation required. Brian Halford comments: I was on the train and paid 2/0d (10p) for the child return. It was a midweek match with evening kick off. Train started from further south (possibly Coulsdon North? ) because the train was half full when it came into East Croydon where I joined it around 6pm. Stopped at Norwood Junction (to pick up passengers) cannot recall where else it stopped to pick up passengers. Routed via Forest Hill, London Bridge (reverse) then to Charlton (cannot remember if via Greenwich or Lewisham). Return train left Charlton between 21.30 and 22.00 returning same route. My memory was the train was excessively overcrowded. In my 8-seater compartment at its most crowded were about 12 people standing with some very young children sitting in the luggage racks..!!!!!!  But, as most passengers were regular London commuters, this was quite normal. 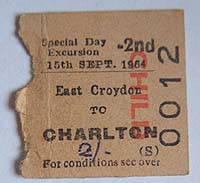