Notes :
(1) This was the second jointly-organised railtour by the West Glamorgan Railway Society & Monmouthshire Railway Society. The tour itinerary carried the following comments; 'This will be the last passenger train through from Pontypridd to Cowbridge, and possibly the last ever passenger train over the Cowbridge branch. As local services over the Bridgend-Barry line ceased as from 15/06/1964, this train will form a farewell trip to 67 years of passenger train operation'.
(2) Despite photographic evidence to suggest this train also visited the terminus of Cardiff Clarence Road, Ray Viney confirms the train did not - it terminated at Cardiff Riverside. 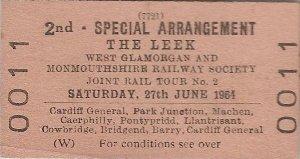 Note: Both Aberthaw and Barry Town passing times given as 16/15 in timing sheet;
from the distances it seems likely that the Aberthaw passing time should be earlier than 16/15