Note :
(1) Originally uploaded named 'Severn Bore' in error. This trip was a re-run of the tour of the same name run on 6th June 1964...but did it run to exactly the same route & times?
(2) John Stretton comments: This tour featured 1658 and 1664 (sometimes double-headed, sometimes top-n-tail) and traversed much of the then extant Severn & Wye Railway system.  I have shots at Coleford, Milkwall, between Coleford and Coleford Jn, between Coleford Jn and Parkend, (all double headed), Speech House Road - then the limit of track - Tuft's Jn (1664 on its own) and I know it visited other parts of the Forest. 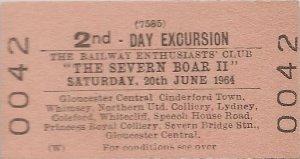