Note :
(1) Loco propelling.
(2) Tony Davies adds: Leaving Darlington 8 minutes late, the engine ran tender-first to Forcett, Valley Junction (run round), so as to, later, tackle the stiff climb to Tow Law boilerfirst.  Water should have been taken at Wear Valley Junction, but, as none was available there, a quick top up was made at Bishop Auckland, outward.  At Tow Law the engine ran round and, after traversing the Spennymoor line, the engine then propelled the vans to Coxhoe West Hetton.  A disappointment on the run from Ferryhill to was the inability to enter the loop at Sedgefield so as to take water from the distinctive N.E. tank then at that location. At Tees Bridge sidings (at Bowesfield, between the former S&DR and the lines to Thornaby), the engine ran round, reversed to down passenger line and then forward to up goods line (Note the goods lines at Eaglescliffe were not realigned until the 1968/9 winter). About 16 minutes late away, 56mph was clocked after Urlay Nook before taking the former S&D line to Park Gate (East Curve) Junction, thence to Darlington Bank Top.  We were home early anyway!
(3) 43129 was photographed at Forcett Jn carrying headcode 2Z20 - was this headcode used throughout? 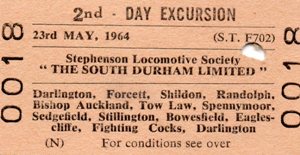