Notes :
(1) For visit to works & MPD. Johns Clifford's notes aren't clear as whether the train reversed at Eastleigh Works or went round the works loop however the booked timings suggest the train was booked to reverse in the Eastleigh Works yard. Rob Tibbets thinks 30073 just went into the works and back again i.e. not round the loop.
(2) For visit to Salisbury MPD.
(3) Booked timings show the train travelling into Poole and reversing on the outward leg, then taking the direct route from Hamworthy Junction to Broadstone on the return - was the above ('reverse of booked') as given by John Clifford an on-the-day diversion, or did the train in fact take the booked route? Rob Tibbets notes suggest the booked route was taken, not as shown above...can anyone else confirm? 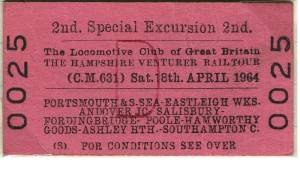