Note :
(1) 30667 was to have hauled the train from Ash but was failed before the start (see photo below) and 33035 substituted. The comment already made on this page "an M7 was sent over from Salisbury for the second part of the tour but this failed so the train got the 'Mickey Mouse' tank instead" suggests a second loco failure took place - confirmation anyone?
(2) After Alton the train was booked to cover the freight sections to Farringdon & Treloars Hospital but these were omitted as it was not a push-pull engine and the train was very late anyway.
(3) Booked reversal point was Shawford.
(4) At Didcot the train was booked to run direct to Foxhall Jn, then to West Curve Jn, then to No.7 bay. In the event it stopped in Didcot Platform 5 (4.03 pm), proceeded to Foxhall Jn and then reversed, probably back to Platform 5.  The 2-6-2T probably ran round and was serviced at this point.
(5) 41329 on rear.
(6) At 5.20 pm (13min late) the train was reversed, with 6921 as pilot, to Didcot North SB.  1 min stop here, to detach 6921, then the 2-6-2T ran direct, past Didcot East SB and on the local line, to Reading.
(7) After Ascot the train was booked to cover the Virginia Water west curve but could not do so as one of the signal boxes was shut so it went to Staines Central to reverse. Tony Davies however records the reason for not covering the curve as "points failure" and he also notes that 41329 ran round the train at Virginia Water, not Staines Central as suggested. David Manders comments: The West box was rarely used and the explanations I heard were 1) They could not find the key to the box and were not prepared to break in,  or 2) the points had seized and could not be moved. He also thinks the train reversed at Staines, but adds: at the same time I have a recollection of reversing in the sidings at Virginia Water so one of these may have been another occasion.
(8) Although showing in the booked timings, no contributor has mentioned this leg - did it take place and, if so, was 33035 the traction? 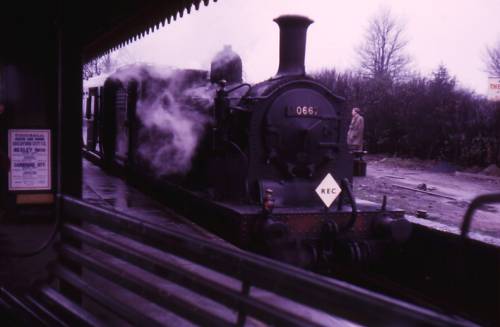 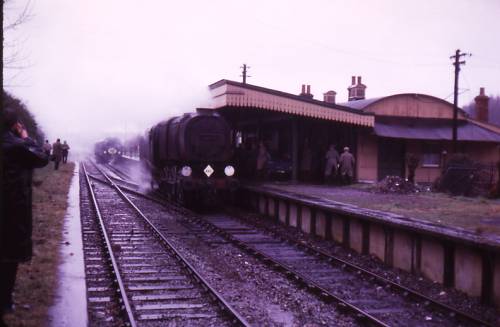 33035 running round the train at Borden (photo: Terry Dorrity) 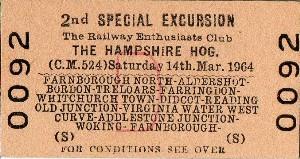 Note: The timing sheet carried a footnote that the mileages excluded the distance from Didcot North Jn to Didcot West Jn and into the No.7 bay. A further note confirmed the distance quoted from Reading General to Ascot was via the Old Jn.