A series of football specials associated with FA Cup 3rd round matches.

Note :
(1) Route & loco confirmation required for all trains.
(2) This special is reported to have run into problems on the return leg with the communication chord being pulled no fewer than 47 times between Oxford & Wolverhampton. Despite having a pilot engine on from Banbury, the pair stalled at Bordesley and later stood for about an hour at Birmingham Snow Hill whilst the brakes were examined. The pilot engine was swapped at Wolverhampton as the Banbury engine did not have the electrification flash symbols and was thus barred from working through Crewe. The train arrived back into Manchester in the early hours of Sunday, some four hours late.
(3) 45531 was on the train on arrival into Hull - did it work throughout? Does the ticket below belong to this train, or were there others?
(4) D151 was on the train on arrival into Cardiff - did it work throughout?
(5) Did this train run - details taken from a ticket which has no marks to suggest it had been used. 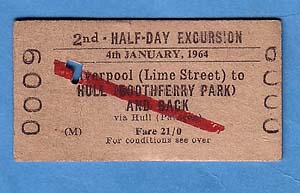 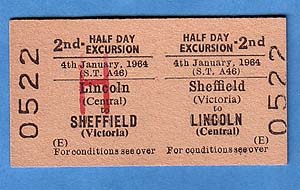