Note :
(1) Loco propelling. The tour timing sheet showed the second leg from Eston to Guisborough Jn and fourth leg from Boosbeck to Guisborough Jn to be loco propelling but a covering letter explained British Rail had revised the arrangements after the timing sheets had been printed; to run round at Eston and Guisborough Jn (after return from Brotton at 12.41/12.47).
(2) Originally uploaded as loco 63641 in error.
(3) Loco ran-round and took water.
(4) Route confirmation required - above is from booked timings. Robin Coulthard comments: It runs in my mind that the itinerary for this trip was not 100% accomplished. I rather thought that the driver of the Q6 got cold feet re: the state of the track on the Kilton Branch and refused to progress all the way. Ian Clark (SLS) adds: The original advertising notice stated the routing to Brotton was via Guisborough (booked only as far as Boosbeck & return due to line being severed). Tees Dock (completely new branch) was also on the notice but did not appear in the tour itinerary. Ian also adds: On the day the driver of the tour would not take the train all the way up to Kilton Mine due to the state of the track, Tony Davies reported that: 'my log shows that we only reached 'Kilton Mine/Lingdale Mine Junction' (MP 0-3/4), terminated here some 7min before time and, despite a 4¼min photo stop, this gave time for an extra photo stop on Huntcliff'.
(5) Headcode as carried by 63431 was Z01 however the timing sheet listed the headcode as 1X1.
(6) Tony Davies comments that there was a reversal required to gain the Eston branch at Inner Jn and also a Guisborough Jn to gain the up line. 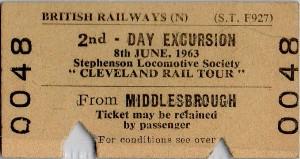 Light Engine and guard : leave Thornaby for Middlesborough at 09.35