Note :
(1) Was due to run on two successive Sundays, see also 15/09/63 (but confirmed as named 'The Blue Belle') however Mike Morant is completely certain this train did not run, for reasons unknown. Mike comments: With regard to the tickets (for both 15/09/63 & 22/09/63 in the name of 'The Scottish Belle') , I have a gut feeling about them. This is only a guess but an educated one. I think that they're what are known as 'audits' but that covers quite a range of possibilities. I think those 'Scottish Belle' tickets were printed for tours that didn't actually materialise, were then stored for years at Deepdene (the SR audit office) and were subsequently sold in bulk for virtually nothing to the TFCS (now the Transport Ticket Society) who distributed them in bundles amongst the membership. Another educated guess is that it was originally intended to double-head the projected tours with Caley 123 AND one of the preserved but active Scottish 4-4-0s but it didn't happen that way for reasons we'll never know. It might well be that the ticket for 15/9/63 was actually issued and used but the tour's name on the day, as clearly seen in my image, was 'The Blue Belle' on the tour page for the 15th. Evidence that tickets with the 'Scottish Belle' name were indeed used has since come from The John Debens Ticket Collection in the shape of a clipped ticket (displayed on the tour page for the 15th). 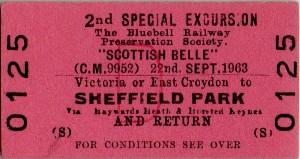 From The John Debens Ticket Collection 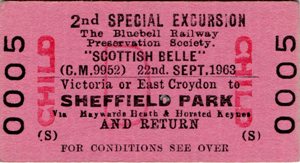