Notes:
(1) For visits to Crewe works & sheds. It is reported over there were over 1,000 applications received for the 600 seats available. Subsequent HCRS tour itineraries gave the running date for this tour as 5th February but several sources have confirmed that was in error and the running date was definitely 10th February.
(2) Chris Weavers comments: I remember it being a long snowy trip. 'Mortehoe' had to set back several times coming out of Wolverhampton (I believe). Don't know now what the engine was out of Crewe, but we did terminate at Aylesbury as Mortehoe ran out of either coal or water (confirmed by Ron Walker - it ran out of coal). The tour passengers all piled into a DMU for London.
(3) Dick Franklin adds: On the front of the timing sheet for this trip the following is written 'The engine for today is 34094 Mortehoe...will haul the train in both directions but it will be taken off at Crewe station and a smaller locomotive will take the train into the works. On part of the return journey the train may be double headed. On arrival in the works at Crewe we would like all passengers to stay on the train until a Society official collects you. This is because the train has to be split into six parties of approximately 100 to go round the works and sheds. Crosville double-decker buses will take each party of 100 to the South shed. All parties will finish at the North shed where they will go over the footbridge and on to the train standing in the platform'. A subsequent tour itinerary stated that an ER class B1 was used between Crewe and Nottingham and John Dunford confirms 'from Crewe Station we certainly had 61409 on the head end'.
(4) John Dunford remembers: The train was hauled into Crewe Works by another engine, sadly I did not record the number. Presumably I was too interested in the feast of locomotives that were on display. Interestingly, on the route in there were many spotters hiding in scrubs on the North Side of the line, presumably hoping to make an illegal entry to the works. Of interest was that there were many Westerns (class 52) under construction at the works that day. I do not remember snow till arrival at Aylesbury after many delays. here we all decamped to a DMU for a very late arrival at Marylebone. My father had been waiting to collect me with his mate. They reckoned that they had counted how many bricks had been used in the construction of both the Hotel and Station such was the delay. On returning to Marylebone we were passed by 34094 at high speed. I was told (later as I eventually worked for BR at Euston) that the SR Train Crew had gone out to Aylesbury to collect their stead. The problems had been ALL DAY that of LMR men not understanding how to fire a Spam can. I suspect that Ron Walkers comment of running out of coal would refer to the LMR Drivers view that there was not enough coal to get them home to Marylebone and for the SR Crew to get it back to SR.
(5) Formed in 1955 and originally known as the 'Middlesex Loco Spotters Club', their name was changed in the late 1950's to the 'Home Counties Railway Club' then in January 1963 it changed again, to the 'Home Counties Railway Society'. 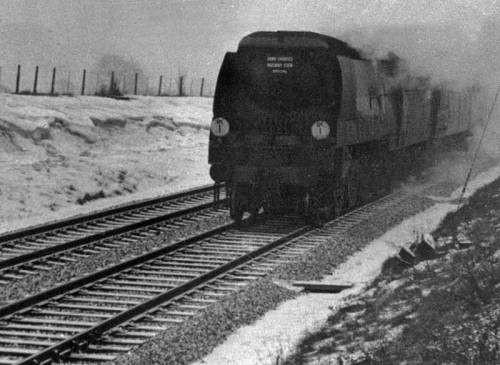 Brian Burrows believes this is a photo of the tour - seen near Leamington Spa. 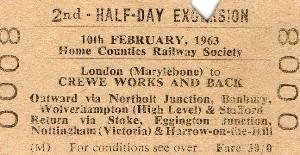