Notes :
(1) Originally shown as all legs hauled by MSC38 but now understood that 47428 & 51232 were involved in the Salford to New Barns Junction to Agecroft legs. Andrew Fairholm has this recorded as the 'Salford Area Brake Van Tour' but this is not recorded in the LCGB 'The First Hundred' book which simply calls this outing 'New Barns'). 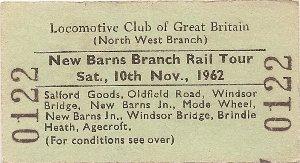