Notes :
(1) Terry Jackson comments : It had been intended that the 45543 (the only remaining un-rebuilt Patriot) would work through to St Pancras but it was apparently banned from the Northampton to Bedford line. 45392 was therefore used for the final leg from Northampton to St Pancras.
(2) Originally uploaded as having traversed the Bedford Midland avoiding line however both Malcolm Peakman (who departed the train at Bedford Midland) and Bill Armstrong both confirm the stop was made (though confirmed it was a late amendment to the itinerary).

Sources : John Clifford (on the train throughout) & Bill Armstrong 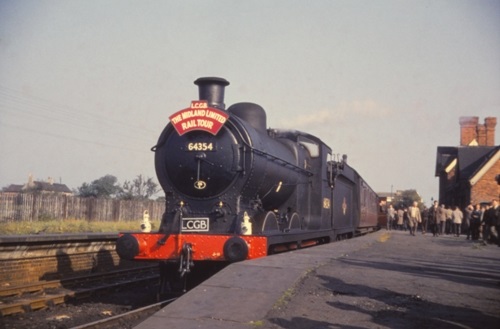 64354; caught at an unknown location on this tour (photo: Keith Partlow)
Bill Armstrong suggests it is Egginton Junction, the only place a photo-stop
took place when this loco was hauling the train. 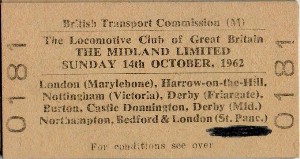