Notes :
(1) For Works & Shed visit, plus the newly opened Great Western Railway Museum (opened just two days earlier). A subsequent HCRC tour itinerary gave the running date for this tour as 3rd June however it is confirmed by Ron Walker that this train ran on 24th June, not 3rd June.
(2) Train was late leaving Paddington as 30850 arrived chimney-first, necessitating the loco being turned at Ranelagh Bridge depot turntable prior to departure.
(3) Formed in 1955 and originally known as the 'Middlesex Loco Spotters Club', their name was changed in the late 1950's to the 'Home Counties Railway Club' then in January 1963 it changed again, to the 'Home Counties Railway Society'.
(4) 30850 was photographed at Didcot carrying headcode SPL17 - was this headcode used throughout? 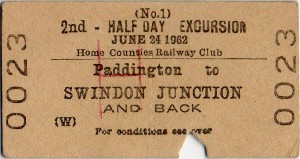 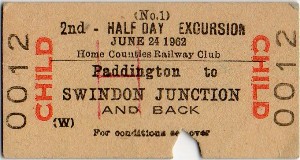