Notes :
(1) This was the first of what were to be six successive annual Scottish Ramblers, run each Easter by the BLS and others. It was advertised as 'a railtour designed to give railway enthusiasts from all parts of the country a chance of seeing the northern Scottish lines in one weekend'. The fare for the four days was £7 15s (£7.75)!
(2) Booked route on the outward leg was: Glasgow Central - Muirhouse Central Jn - Cathcart West Jn - Whitecraigs - Neilston High - Lugton East Jn - Lugton - Stewarton - Kilmarnock, however due to a signalling error the train was routed via Shields Road. After a 4min stop there the train proceeded without a pre-arranged path as indicated via Paisley Gilmour Street. On the return leg the originally uploaded route was: Kilmarnock - Crosshouse - Dalry - Lochwinnoch - Elderslie - Paisley Canal - Corkerhill - Strathbungo Jn, however it is reported the train went via the Ayrshire & Lanarkshire and Lugton and terminated at Glasgow Central rather than Glasgow St Enoch as booked.
(3) Tour participants were advised to travel to Inverness for the next day's leg of the tour; by either the 16.25 service train (44996 on load 11 to Perth then bolstered by the Edinburgh portion to 15 coaches, hauled by D5128+D5324 to Inverness) or the 23.15 overnight sleeper from Buchanan Street (traction confirmation for the sleeper is required).
(4) A planned visit to the Leslie branch was omitted for reason(s) unknown. Booked route was: Ladybank – Markinch – Auchmuty Jn – Leslie (reverse) – Auchmuty Jn – Markinch – Ladybank; then onwards as shown.
(5) The SLS report of this tour states that reversals took place at Careston (not Tannadice) and Leysmill (not Colliston).
(6) An RCTS photo list gives this loco as D5336 - photographed at Kirriemuir and Alyth Junction - however an SLS review of the trip states (several times) the loco to have been D5339 which is thus believed correct.
(7) An SLS report of this tour reports 'after some maneuvering at Alyth Junction, D5339 cautiously propelled us into the original 1831 station at Newtyle...'. Details of the movements made at Alyth Junction are required.
(8) Loco propelling. 103 sits in the spring sunshine at Forres on April 21st.
(Photo by G N Turnbull ©TOPticl Digital Memories - see
www.TOPticl.com for further details and a chance to buy a full size copy) D8028 at Lauriston (above) and St Cyrus (below) on April 22nd.
(Photo by G N Turnbull ©TOPticl Digital Memories - see
www.TOPticl.com for further details and a chance to buy a full size copy) 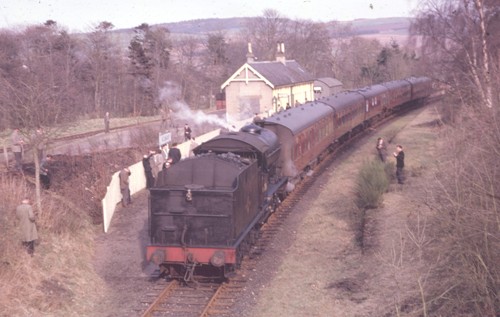