Notes :
(1) Stock on outward leg was load 12 including M280 (SR Devon Belle observation car). From Blackpool for the return leg M280 was replaced by two sleeping coaches.
(2) Banked by 90348.
(3) This special was for employees of the Northern Rubber Company which had Alan Pegler as chairman who had specially requested MR 1000 to double-head with 60022 leaving Blackpool. MR1000 arrived into Blackpool piloting 45548 on train 1T07 - a charter which originated from Stoke Golding, though the loco on arrival at Blackpool was displaying a 1T00 headcode for reason(s) unexplained. The return fare from Retford was £3.50 inclusive of hot lunch (outward) and dinner (return) served at one's seat and admission to a dress circle seat for a Blackpool theatre show! The train was run to celebrate the company's 90th anniversary.
(4) Some sources report this train as originating/terminating at Lincoln but this is believed incorrect.
(5) Trevor Machell comments: I have 1X08 noted in my spotting book as 10.55 Retford to Blackpool North and 00.05 Sunday return running via Hare Park Jn and Copy Pit both ways. The suggested journey Copy Pit - Rochdale - Miles Platting - Hope Valley whilst not actually impossible (well apart from actually going through Miles Platting Station!) would be a quite remarkable route even for the early hours of a Sunday morning, especially in the days when total blocks for engineering work were relatively unusual – it would have made a lot more sense just to go direct Preston to Manchester – numerous alternative routes available in 1961. 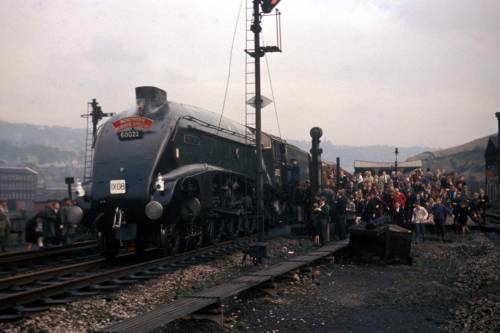 60022 at Sowerby Bridge during a water-stop (Photo: Nige Paine Collection) 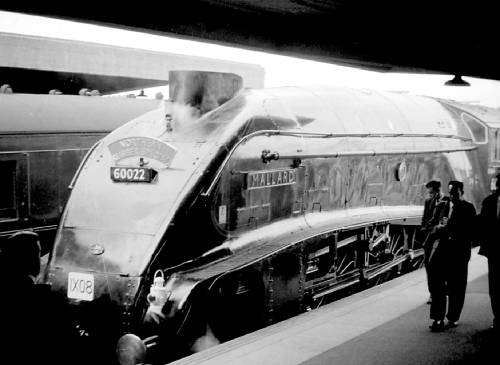